Jaques Francis and the Salvage of the Mary Rose

In July 1547, Jaques Francis, described as a Guinea diver from Arguin Island off the coast of Mauritania, was hired by the British Admiralty along with his Venetian master, Piero Paolo Corsi, to help salvage the wreck of Henry VIII’s famous ship, the Mary Rose. This task, however, was to prove complicated. A legal argument over recovered salvage arose between Corsi and a group of Italian Merchants that led to Jaques Francis being called to the witness stand in English court.

On July 19, 1545, a French Invasion fleet entered the Solent, the strait that separates the Isle of Wight from the mainland of England. They were intent on destroying the English fleet and invading the Isle of Wight. The crew of the Mary Rose attacked the invaders, but tipped over and sank within minutes because she her upper decks were overladen. She took down 400 sailors and 181 guns of various sizes and types. 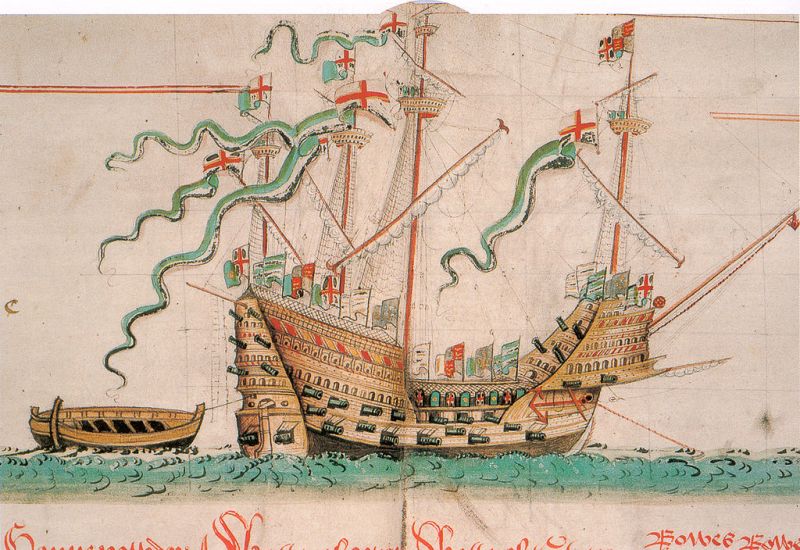 As the sunken ship was in 6 fathoms of water, the salvage job had to be hired out to foreign salvage specialists. A number of unsuccessful attempts were made by different Venetian teams before December, 1545.

In 1546, another Venetian, Piedro Paolo Corsi and his salvage team were appointed to attempt another recovery. Francis the head diver of the team, was bought from another Italian merchant, because of his diving expertise. It is likely he was a highly trained former pearl diver and had an outstanding record of underwater exploits.

The former salvage team accused his master Corsi of stealing blocks of tin from two other wrecks. Francis became an important witness in the court case. While the Admiralty were ready to accept his testimony and selfhood, the Italian witnesses denounced him as an uncivilized man, a “slave,” a “morisco,” a “Black more,” a “bondeman,” and an “infidell borne,” arguing that his testimony was therefore inadmissible.

He stood his ground in court, arguing for his own humanity and personhood, but the whole case highlighted the difficulties Europeans had in accepting black men and women as human, and in accepting their intelligence and ethnic origins as worthy of respect.