The white Portuguese sailors can be a rough bunch. They are lewd in public, often abusing the trust of the Japanese as they did the peoples in Mombassa, Cochin, and Macao. Their behavior does not change greatly from on the ships to the land. The Jesuits implore all of us to act as men of God, to respect the Japanese and their customs. The Portuguese sailors’ public drunkenness and heathen behavior does not bring in more Christian converts, only fools parted with their money. Among the Japanese, of course a poor image of foreigners has formed over the years.

Others of us take more care to build connections: Japanese who can provide the best trade deals. To act a nuisance does not make much money on these islands.

On this, I must mention the constable Alfonso. He was recently accused of killing another man’s dog by kicking it, forcing me to intervene and pass quick judgement. Alfonso is friendly enough, but he despises dogs, having been bitten before. He told us as much once, while we worked to unload the ship in Nagasaki harbour. In the event, a price was agreed with the Japanese owner for the loss of his dog. It was a small amount to make him whole. Privately, Alfonso said he is happy the beast is gone; he doesn’t need to watch out for the teeth anymore. I had some of his wages stripped, as a message to the other constables. We must remain in the good graces of our hosts. 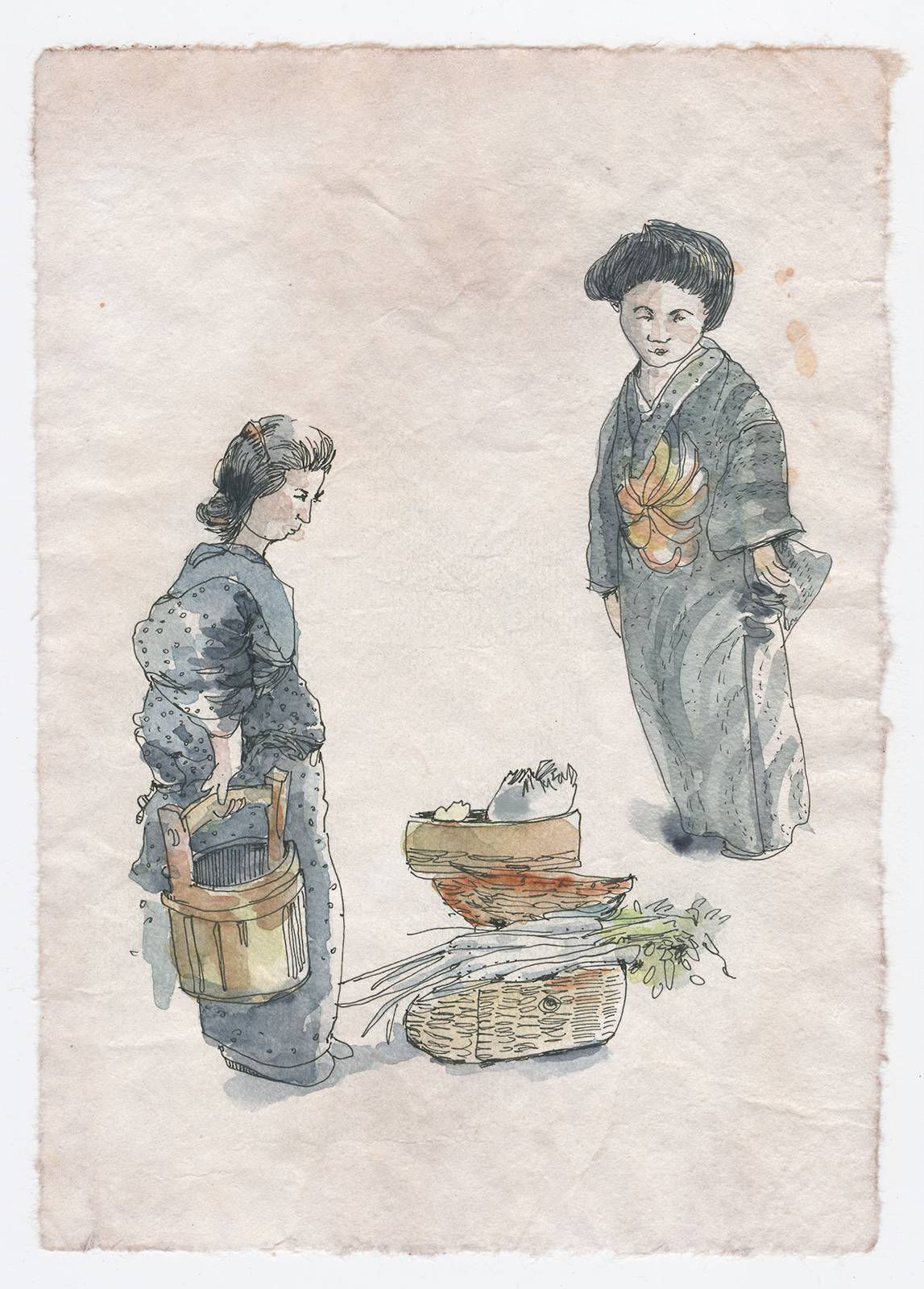 Japanese Women with Buckets and Vegetables 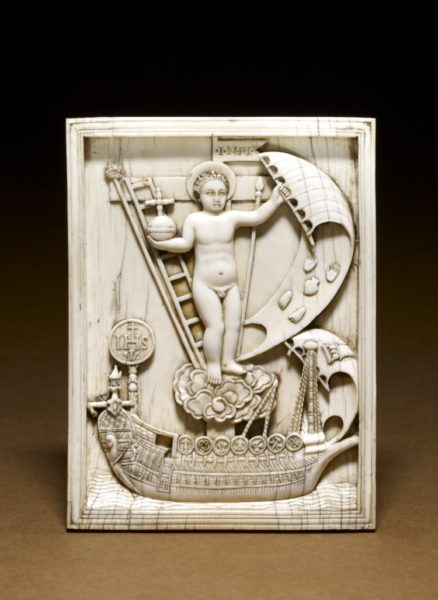 Carved by a Sri Lankan artist, all traces of his culture have been removed from this work. An interesting example of the artist’s eye being wholly overtaken by the perspective of the foreigner.

Translators are a godsend in Nagasaki. We have been introduced to a group of Christian men and women who act as language tutors and guides. They pay special attention to sailors who have patience, and coin. These people belong to the Church, having been converted by missionaries over the past 30 years. As such, they are honest and goodly in their dealings with us. Polite but curious of the lascarim and Africans in my crew, these Christians take special effort to converse with them and ask questions of their background. No hatred of men with dark skin is in their hearts; we relax around them. Much curiousness is about my position as a ship captain, something Nagasaki does not see often. Their term for us is kurobo, or black man. If it means we are granted kindness the white men cannot stand to offer, we can stand it.

A most interesting people.

Depictions of foreign emissaries to Europe from Africa. 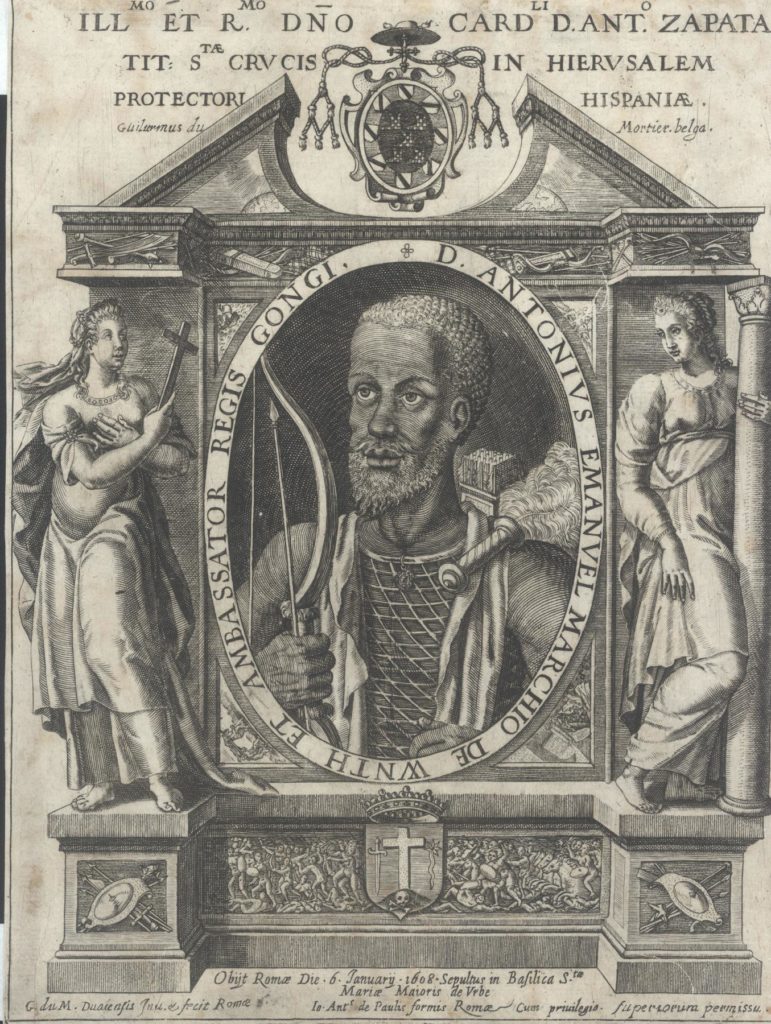 Portrait of Don Antonio Manuele de Funta, Ambassador of the King of the Kongo to the Pope

Part of a Congolese delegation to Europe. During this time, artists started promoting the vision of a cosmopolitan and international Europe. It was during this period that the convention was introduced of including a black African as one of the three foreign kings in images of the Adoration of the Magi. 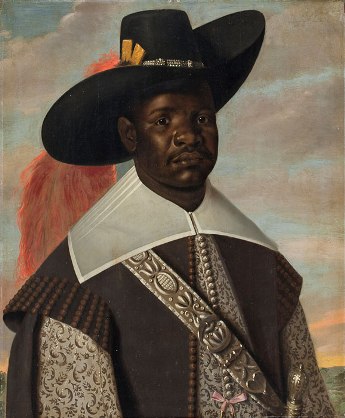 Dom Miguel de Castro is depicted in his role as ambassador from the Kongo province of Soyo to Holland’s colony of Dutch Brazil. De Castro’s 1642 mission on behalf of Soyo’s ruler, Daniel da Silva, was to strengthen ties with the Dutch in order to assert independence from Kongo and counter Portugal’s increasingly aggressive presence in Central Africa.

Read more
Temples and the Japanese Religion - August 1599 The Japanese shrines are wooden and carved in strange shapes. The Foundling - September 1601 My friend Minatoya Sute told me a story about her childhood.